How are you all (not) enjoying the chapter break? The new one officially starts on Tuesday, but here's the first page early as promised! I have a couple of news to share too.

First: as of this Tuesday most of the leftover SSSS books have been sent to the Hiveworks store (in America), and looks like they will be available before Christmas barring customs mishaps. Which could happen, because apparently shipping big crates of commercial items across the world is an ordeal! Fortunately my dad stepped in and pretty much took care of dealing with the freight company and getting all the necessary equipments in place, because as you know I've just been way too drained to handle anything extra these last couple of months. I really would have left the extra books be until after Christmas if I had had to do it myself, but now they're on their way!

Second thing: remember when I said I'd make SSSS-related wallpapers that you could buy if you wanted to support the comic with something little? Well I did! It's our heroes in their local outfits a couple years before meeting each other! (Emil, you're so chubby and fancy.): 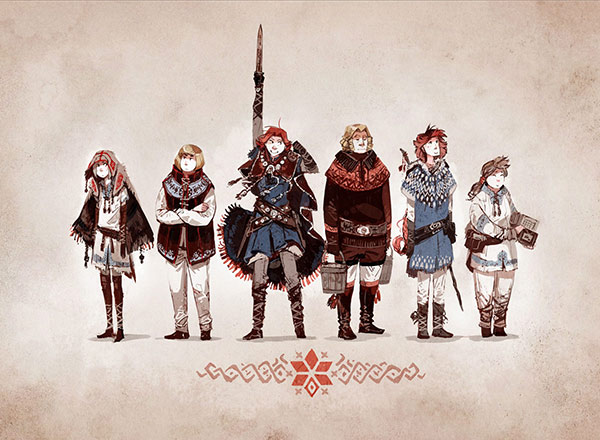 Drew it this summer, forgot all about it when the books arrived, and just found the image again and decided to take the extra 20 minutes to actually make it available on Gumroad --->liiiink, click the "I want this" button if you wanna buy it.<--

It's only 2 buckeroos (+ the VAT tax of your country if you live somewhere in the EU), and here's the thing: I will make the wallpaper available for free for everyone in a month or two when I make a new wallpaper, because I wouldn't want to make a lot of exclusive stuff that's only available for those who are able to pay for it. So these will basically be early access images and just a simple way to support the comic without having to buy something physical or expensive (especially since I barely have anything to sell yet anyway). So yeah, there you go, I hope you all like it!

And finally book shipping status: only 8 out of the 40 high rewards left to ship out, and only 5 character portraits left to draw! Half of them are orders with 3-4 books in them so I'll be carrying those packages one by one to the post office this weekend. :3 See you guys on Tuesday!