Largest time skip so far...oh yes, I said "so far", there's one even larger one coming up before we're finally in the time of our dear main cast. But now it's it's time for the Iceland part of this prologue. Except apparently it doesn't take place in Iceland, just in Icelandic waters and on an Icelandic coast guard ship. This part has my favourite colors so far in the comic, and my favourite hair to draw because it's so red and pretty. (No freckles on this red-head though, unlike braidy. :3)

I promised I'd put up a wallpaper-sized version of the previous two pages together, so here you go guys! It's 2560 px wide, which should cover almost all monitor sizes I think: 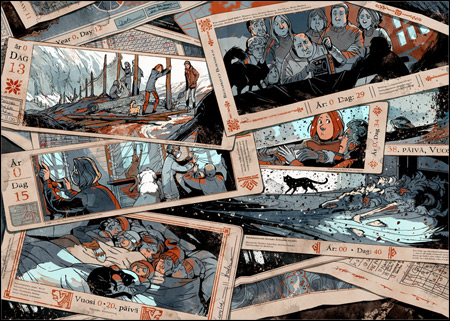 Okay, I think I'll go put on some proper clothes now, the book plates for the aRTD books might be delivered today and I'd like to, for once, sign for a package while I'm not wearing my PJ's.

Comments powered by IntenseDebate - create an account or login if you don't want to comment as a guest.