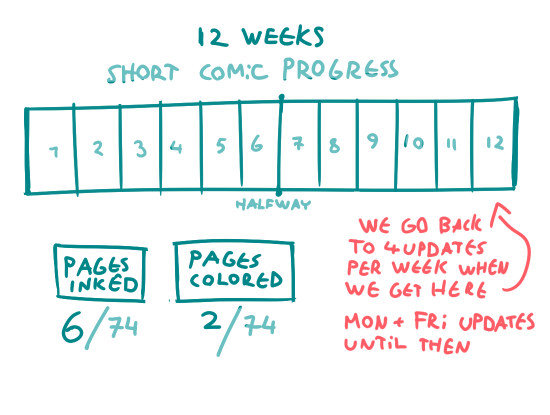 Nope, that's not a countdown to Christmas. This is very out of left field (except for those of you who have been hanging out in the livestreams lately) but I have a short story comic idea that I need to get out of my brain, and I've decided to do it now, this winter. That means, asinthe graph above says, that SSSS updates will onltý be on Mondays and Fridays for the next 12 weeks. That graph is to keep me on track, and I'll update the progress on it on Fridays for you guys. I want to have the short comic almost done by that 12 week mark.

This is a story idea I got a couple years ago or so, and at the time I figured I'll just do it after SSSS is done. But this year I've felt a growing pressure in my soul that I should do it sooner. Maybe I'll do it next year the non-committal part of my mind has been saying, but no, after much praying on the matter I've gotten the resolve to just do it now. I'm hunkering down and getting it done before spring is here instead of just thinking about it for another 2 years.

Anyway, I've worked on it a bit here and there for a bit over a month,got the script pretty well squared and a small handful of pages inked, today I colored the first 2. As you can see it's going to be very different from what SSSS is like: 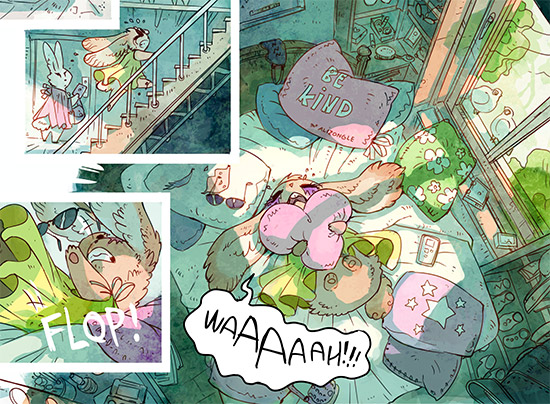 Well, see you on Friday with the next page, and a progress update!