Schedule change and side project start.

This is going to be a very announcement-filled blog post, a pretty important one with two parts. The first one might bum some of you out a bit, and the second one should cheer you right back up. Firs announcement: I'm permanently switching over to a 4 pages a week update schedule for the comic from the current 5. Yup, one page less. Wednesday will be the sacrificial day, so the comic will update as regular on Mondays, Tuesdays, Thursdays and Fridays from now on.

Now why did I decide to do this? Frankly, I've always planned on "eventually" slowing down to 4 pages a week, because while 5 pages is doable it's quite exhausting in the long run. Each page takes me about 15-16 hours to finish, so my typical work schedule for the last few years has been almost 80 hours/week just to draw the comic pages. It's a bit of a grind sometimes, especially during chapters that span over several months on end.

I honestly love making the comic though, which is why I've held off on moving to 4 pages/week for so long even though I could have slowed down ages ago, but the thing that has started bothering me more and more is: I have almost no time left in the week for any sort of side projects. And I want to have time for side projects! It is time that I make the time, hence this decision.

Which brings us to the second announcement: SSSS-themed side project! That's right! Almost since the start of the comic itself I've had plans for a shorter story with the SSSS characters, but set in a completely separate science fiction setting. In the beginning I was just thinking of a regular, slower updating comic on the side. But gradually my mind has started yearning for trying something different, to make a more interactive type of story. Something with a bit of a choose-your-own-adventure flare to it, you know the kind of thing I mean: 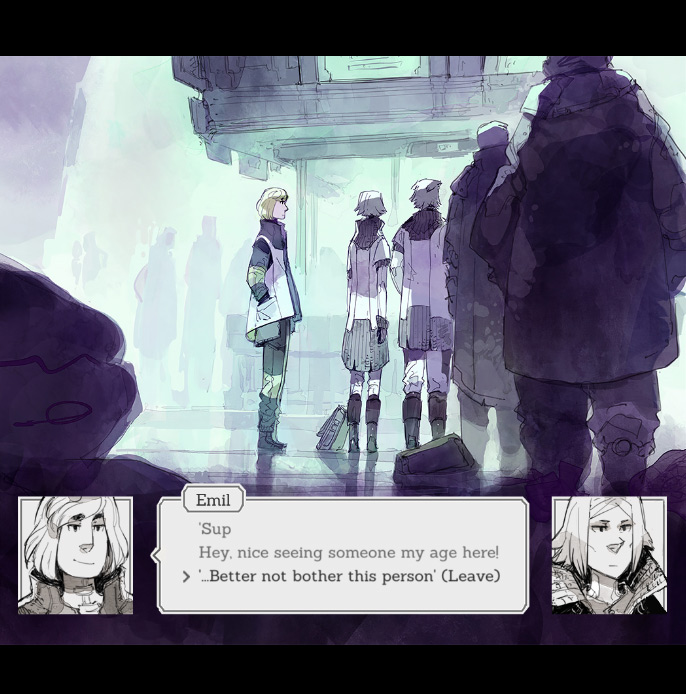 That's all I have to show visually as far as idea mock-ups go. I literally decided to finally start doing this project a couple weeks ago, during the chapter break. And to do this project in the fashion that I really want I need to learn how to *gulp*...code. And I spent most of the break not drawing concept art but instead trying to teach myself the very basics of programming. And to figure out if programming was even something that I could possibly learn on my own.

Turns out it is! Because apparently the internet is shock full of fantastic, free "absolute beginner" courses for everything computer related, followed by an infinite amount of coding tutorials, both in video and text form. People just really like teaching other people their skills on the internet it seems. Hell, youtube even has full lectures of various computer science classes from a whole bunch of universities that I was able to watch. (Which I kinda needed, because I also quickly realized that I didn't actually understand how a computer works, and most of the beginner programming courses kinda had a "you should probably at least know what is inside a computer"- vibe to them, heh.)

Anyway, learning to code has been difficult, frustrating but an absolute delight so far. And even though it's just been a couple weeks and I still am very much an "absolute beginner" aka a dummy, I'm definitely feeling like the vision I have in mind for the project isn't too out there and is something I should be able to realize once I become less crap at this coding business. If it had turned out that programming was completely horrible and not something I could see myself ever becoming good at I would have had to limit my idea to what some pre-made "visual novel" engine could do, but that was not the case this time. Programming is fuuu-un.

I'll have something more interesting to show you guys in a couple of weeks that'll give you a better idea of what I'm planning here. Until then, just know that some sort of interactive science-fiction-ish story with the SSSS characters is going to happen. :3